Outside of a dog, a book is man’s best friend.
Inside of a dog it’s too dark to read.
[Groucho Marx] 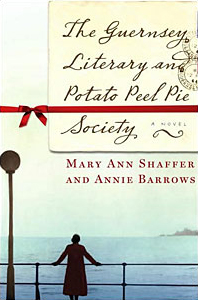 Guernsey, an island in the English Channel, was occupied by the Germans during most of World War Two. For five years the islanders lived in fear, danger and deprivation while they were out of contact with the rest of the world. By the time they were liberated, they were abused and starving but they had forged enriching friendships out of their hardship and need to protect each other.

This novel is a good example of fiction presenting facts in a more effective way than non-fiction can. The reader is absorbed into the experiences of the characters, and remembers the historical experience with more than a precise memory of facts.

The story is told in a series of letters between a young writer, Juliet Ashton, in 1946 London and her close friends in addition to the members of the literary society on the island of Guernsey. The letters are witty, charming, engrossing and satisfying. The story is so well written that it may become one of those durable books that is read year after year and rediscovered each generation–a book that could become a classic.

1 thought on “The Guernsey Literary and Potato Peel Pie Society”