There’s nothing I would retire for,
so I won’t retire.
[James Earl Jones]

I started my adult work life as a caregiver (nurse) and, fifty years later, I spent this year working on a job for Willowgreen, Inc. (a publishing company) that is designed to inspire caregivers. Willowgreen’s owner, Jim Miller, writes this about Daily Inspirations for Caregivers:

If you’re a family caregiver, you can be encouraged and lifted every morning for one complete year with James E. Miller’s newest electronic resource. Each day you’ll receive a personalized email from him containing one of four offerings: a short inspiring video, a brief audio, a one-page writing, or a photo-thought, incorporating a striking photograph with a meaningful quotation.

I’ve been an independent graphic designer for thirty years, and I consider this to be at the top of my list of beloved products upon which I have worked. I was diagnosed with, and had surgery for cancer right before I started working on this project last spring. As I worked on the 365 items used in Daily Inspirations for Caregivers, I discovered that immersing myself in the positive thoughts and images bridged the time between diagnosis and recovery for me. All summer, I was filled with joy while I worked.

Now who in her right mind would retire from a job like that? I’ve decided to redefine my work toward publishing my designs and patterns, something I can do in my home office, but I’ll not retire while I can see, think, and draw on my new iPad Pro.

If you would like a free sample of Daily Inspirations for Caregivers,
you can sign up for it HERE.

There is a fountain of youth:
it is your mind, your talents,
the creativity you bring to your life and the lives of people you love.
When you learn to tap this source,
you will truly have defeated age.
[Sophia Loren] 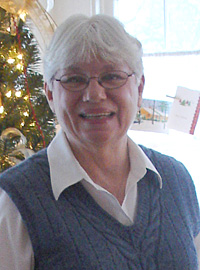 By this time next year, I will have passed my 70th birthday. Seven decades of observing life in this world has influenced my opinions. I’m not saying that my opinions are wise or even accurate, but they do reflect what I have experienced since 1942, and will likely influence the course of my seventh decade. Here are five (in no particular order):

1. … about work and retirement: I love my work. By work, I mean, the way I earn my living. I illustrate, design publications of many sorts (print, electronic, etc.), design needle art patterns, and teach the skills I’ve learned over the years. Except for the decade I worked as a nurse, I’ve been self-employed most of my adulthood. Every job I finished left me out of work until I found another project to do. Fortunately most of my jobs overlapped so I have kept a roof over my head and food on my table. I have also had fun, been motivated to keep learning, and have been enriched by the creative people who are my clients. Why would I want to retire?

2. … about politics and governing: Winston Churchill said a couple of things I keep in mind, especially during an election year:

The best argument against democracy is a five-minute conversation with the average voter.

I am thankful that the governments of the USA (state and national) try to function as democracies. Even so, it is messy. It brings out the best in a few people and the worst in most people. I’ve learned over the years that it isn’t bad to see the worst in some people—some folks’ worst isn’t all that bad. The trouble is, many people express poorly researched or totally ignorant opinions. Even worse, some of those people are candidates. That is why I love to study history. It puts current events into a tolerable perspective. History is replete with examples of arrogance, folly, and small-mindedness. At least our era is maintaining some sort of tradition. Will Roger’s words are timeless:

This country has gotten where it is in spite of politics, not by the aid of it. That we have carried as much political bunk as we have and still survived shows we are a super nation.

3. … about civility: I think that civility starts at home so I am constantly having to be a gatekeeper for my thoughts and words. Lack of civility seems to grow out of being irrationally judgmental and self-serving. Unfortunately, I observe the lack of civility every time I go out into the world, even if it is just through my TV. I agree with Emmylou Harris’ words:

As citizens we have to be more thoughtful and more educated and more informed. I turn on the TV and I see these grown people screaming at each other, and I think, well, if we don’t get our civility back, we’re in trouble.

4. … about creativity: I believe everyone is creative. Some people haven’t nurtured the creative part of their human nature, but I believe it is still there. For me, one idea crowds out another in such rapid succession that I feel like I need to shift my mind into low gear to capture even one. It is a blessing and a curse. It is a blessing in that it is a positive, soaring experience that puts the frosting on the cake of life. It is a curse in that it is hard to sort the better ideas from the rest, and it takes so long to bring even one idea into a tangible state. If I were boiled down to my essence, I pray that essence would be love and gratitude wrapped in creativity.

5. … about maturing: I’ve never been afraid of aging, but I’ve often been afraid I’d never truly mature. I have a friend who says, “Some folks live forty years, and other folks live one year forty times.” My perspective has certainly changed over the years so I haven’t lived the same year over and over. I’ve learned from most of my mistakes. My seventh decade was the best of all (so far) so I look at tomorrow with anticipation rather than dread. Also, I’ve finally learned to fill the present moment with my best effort.