The best of all gifts around any Christmas tree:
the presence of a happy family
all wrapped up in each other.
[Burton Hillis] 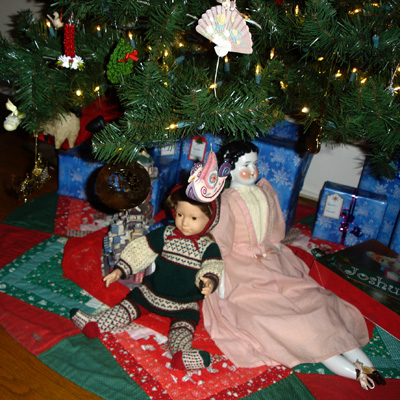 In the late 1940s, my Aunt Esther was working on a masters degree in children’s book illustration when she composed and illustrated a book that told the story of my grandmother’s childhood in Kansas—Little Sister Sunflower. One episode in the book tells about the doll in the pink dress in this photo that I snapped this morning. 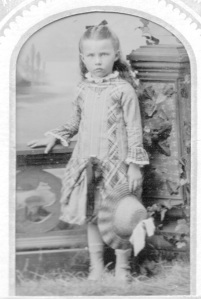 My grandmother, Gertrude Chamberlain nee Black (the Sunflower), was born in 1877. This Christmas story took place on Christmas Eve when she was six.

It was just the kind of weather for Christmas. It looked like the Currier and Ives print hanging in the front parlor. Snow covered this Kansas world, and the clouds were so low they looked like they were resting their elbows on the tree tops.

The Sunflower was leaning on the windowsill, blowing her breath on the windowpane. “Night will never come. It will just never come,” the little girl murmured.

Tonight was the district Christmas tree at Peebler school house. Ma had worked in the front parlor with the door closed most of the afternoon. Pa and the boys had the chores done. The sleigh stood at the back gate.

It was finally supper time, but the Sunflower was too excited to eat. Everything was so wonderful at Christmas time. The house smelled good with cedar and cookies and molasses taffy and good nature. 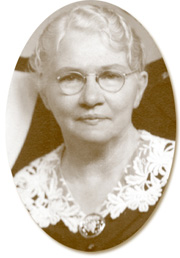 The Sunflower, as I remember her

Ma put on the Sunflower’s best dress of dark wool over her small hoop. Then she bundled the squirming child into the red velvet cloak and hood. Myrtle wrapped hot bricks in paper for foot warmers, and pa carried the box of gifts out to the sleigh. At last, they were finally in the sleigh. Francis and John William rode along side on horses.

The Sunflower closed her eyes. She had waited all day for this moment. The team dashed through the lot gate to the music of the sleigh bells on their harness. It was a merry trip with laughter and greetings to neighbors along the way.

The school house was packed. Each family in the district had brought their gifts to put under the community tree. The sunflower’s eyes were wide with wonder and amazement as she gazed at the tree with its hundreds of gleaming candles. Each time someone opened the school house door, the candle flames would bend and dance.

Almost at the top of the tree, tied to a big limb, was a beautiful doll. Her china head with painted hair glistened in the candle light. The Sunflower was sure the doll’s blue eyes were looking directly at her.

Santa Claus came in with a flurry of snow and sleigh bells. He laughed and began to hand out the gifts, but the Sunflower didn’t even hear what Santa was saying. She was carrying on an imaginary conversation with the beautiful doll.  Wonder who would get her? The Snarr girls? They never took care of their playthings. Maybe it was little Florence or Mattie Belle Deweese.

Jack Keck, who was helping Santa give out the presents, reached up and took down the lovely doll. He looked at the name tag and read out loud, “Miss Gertrude Chamberlain!”

The Sunflower couldn’t breathe, but she held out her six-year-old arms to receive the precious gift. The doll was almost as tall as the little girl. It had tiny china hands, and feet with painted shoes. It wore a dress like the Sunflower’s and had three starched petticoats.

The child held the doll close, kissing the cool china head over and over again. She saw no more of the Christmas party.

10 thoughts on “Another Christmas Story”